In previous tutorial, we’ve looked at utilities for linking processes together and monitoring their lifecycle as it changes. The ability to link and monitor are foundational tools for building reliable systems and are the bedrock principles on which Cloud Haskell’s supervision capabilities are built.

A Supervisor manages a set of child processes throughout their entire lifecycle, from birth (spawning) till death (exiting). Supervision is a key component in building fault tolerant systems, providing applications with a structured way to recover from isolated failures without the whole system crashing. Supervisors allow us to structure our applications as independently managed subsystems, each with its own dependencies (and inter-dependencies with other subsystems) and specify various policies determining the fashion in which these subsystems are to be started, stopped (i.e., terminated) and how they should behave at each level in case of failures.

Supervisors also provide a convenient means to shut down a system (or subsystem) in a controlled fashion, since supervisors will always terminate their children before exiting themselves and do so based on the policies supplied when they were initially created.

Supervisors can be used to construct a tree of processes, where some children are workers (e.g., regular processes) and others are themselves supervisors. Each supervisor is responsible for monitoring its children and handling child failures by policy, as well as deliberately terminating children when instructed to do so (either explicitly per child, or when the supervisor is itself told to terminate).

The RestartPolicy determines the circumstances under which a child should be restarted when the supervisor detects that it has exited. A Permanent child will always be restarted, whilst a Temporary child is never restarted. Transient children are only restarted if the exit normally (i.e., the DiedReason the supervisor sees for the child is DiedNormal rather than DiedException). Intrinsic children behave exactly like Transient ones, except that if they terminate normally, the whole supervisor (i.e., all the other children) exits normally as well, as if someone had triggered the shutdown/terminate sequence for the supervisor’s process explicitly.

When a supervisor detects a child exit, it will attempt a restart. Whilst explicitly terminating a child will only terminate the specified child process, unexpected child exits can trigger a branch restart, where other (sibling) child processes are restarted along with the child that failed. How the supervisor goes about this branch restart is governed by the RestartStrategy given when the supervisor is first started.

Whenever a RestartStrategy causes multiple children to be restarted in response to a single child failure, a branch restart incorporating some (possibly a subset) of the supervisor’s remaining children will be triggered. The exceptions to this rule are Temporary children and Transient children that exit normally, therefore not triggering a restart. The basic rule of thumb is that, if a child should be restarted and the RestartStrategy is not RestartOne, then a branch containing some other children will be restarted as well. ——

The RestartOne strategy is very simple. When one child fails, only that individual child is restarted and its siblings are left running. Use RestartOne whenever the processes being supervised are completely independent of one another, or a child can be restarted and lose it’s state without adversely affecting its siblings. 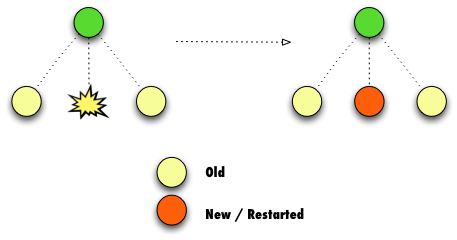 All or nothing restarts

The RestartAll strategy is used when our children are all inter-dependent and it’s necessary to restart them all whenever one child crashes. This strategy triggers one of those branch restarts we mentioned earlier, which in this case means that all the supervisor’s children are restarted if any child fails.

The order and manner in which the surviving children are restarted depends on the chosen RestartMode which parameterises the RestartStrategy. This comes in three flavours:

Each RestartMode is further parameterised by its RestartOrder, which is either left to righ, or right to left. To illustrate, we will consider three alternative configurations here, starting with RestartEach and LeftToRight.

If we’d chosen RightToLeft, the children would have been stopped from right to left (i.e., starting with child-3, then child-2, etc) and then restarted in the same order.

The astute reader might’ve noticed that so far, we’ve yet to demonstrate the behaviour that’s default in Erlang/OTP’s Supervisor, and it’s a default for good reason. It is not uncommon for children to depend on one another and therefore need to be started in the correct order. Since these children rely on their siblings to function, we must stop them in the opposite order, otherwise the dependent children might crash whilst we’re restarting other processes they rely on. It follows that, in this setup, we cannot subsequently (re)start the children in the same order we stopped them either.