On this page we describe the TCP Transport as an example for developers who wish to write their own instantiations of the Transport layer. The purpose of any such instantiation is to provide a function

For instance, the TCP transport offers

This could be the only function that Network.Transport.TCP exports (the only reason it exports more is to provide an API for unit tests for the TCP transport, some of which work at a lower level). Your implementation will now be guided by the Network.Transport API. In particular, you will need to implement newEndPoint, which in turn will require you to implement receive, connect, etc.

The following picture is a schematic overview of how the Network.Transport concepts map down to their TCP counterparts. 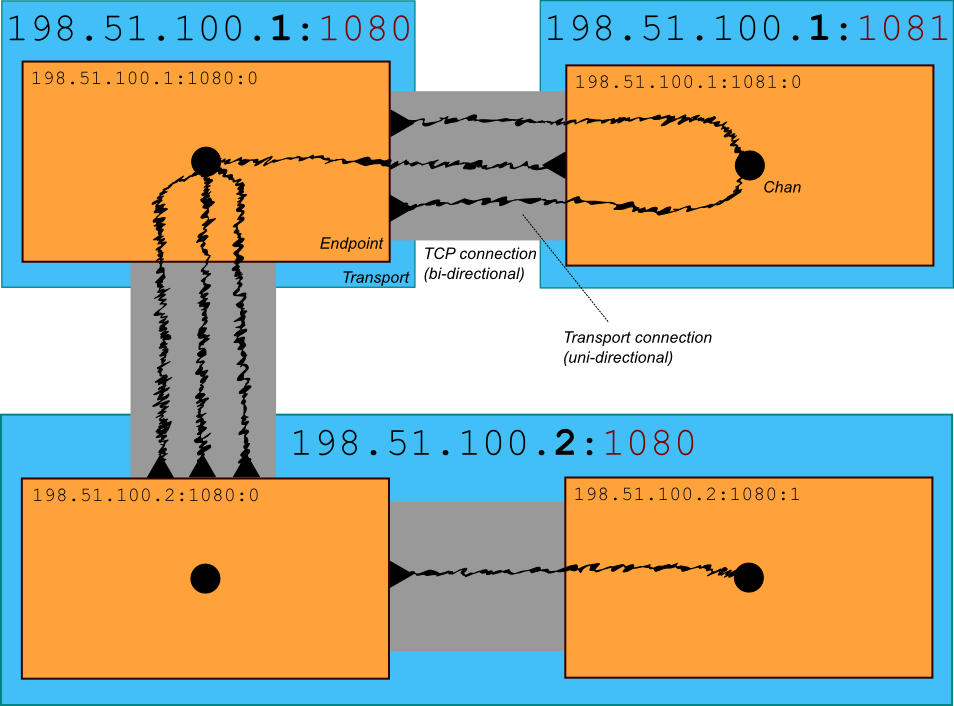 We briefly discuss the implementation of the most important functions in the Transport API.

When a TCP transport is created at host 192.51.100.1, port 1080, createTransport sets up a socket, binds it to 192.51.100.1:1080, and then spawns a thread to listen for incoming requests. This thread will handle the connection requests for all endpoints on this TCP node: individual endpoints do not set up their own listening sockets.

This is the only set up that Network.Transport.TCP.createTransport needs to do.

In the TCP transport the set up of new endpoints is straightforward. We only need to create a new Chan on which we will output all the events and allocate a new ID for the endpoint. Now receive is just readChan and address is the triplet host:port:ID

At this point there is a TCP connection between A and B but not yet a Network.Transport connection; at this point, however, the procedure is the same for all connection requests from A to B (as well as as from B to A):

Note that connection IDs are locally unique. When A and B both connect to C, then C will receive two ConnectionOpened events with IDs (say) 1024 and 1025. However, when A connects to B and C, then it is entirely possible that the connection ID that A receives from both B and C is identical. Connection IDs for outgoing connections are however not visible to application code.

To send a message from A to B the payload is given a Transport header consisting of the message length and the connection ID. When B receives the message it posts a Received event.

To close a connection, A just sends a CloseConnection request to B, and B will post a ConnectionClosed event.

When there are no more Transport connections between two endpoints the TCP connection between them is torn down.

In the TCP transport createTransport needs to do some setup, newEndPoint barely needs to do any at all, and connect needs to set up a TCP connection when none yet exists to the destination endpoint. In Transport instances for connectionless protocols this balance of work will be different. For instance, for a UDP transport createTransport may barely need to do any setup, newEndPoint may set up a UDP socket for the endpoint, and connect may only have to setup some internal datastructures and send a UDP message.

Network.Transport API functions should not throw any exceptions, but declare explicitly in their types what errors can be returned. This means that we are very explicit about which errors can occur, and moreover map Transport-specific errors (“socket unavailable”) to generic Transport errors (“insufficient resources”). A typical example is connect with type:

and has Show and Exception instances so that application code has the option of throwing returned errors. Here is a typical example of error handling in the TCP transport; it is an internal function that does the initial part of the TCP connection setup: create a new socket, and the remote endpoint ID we’re interested in and our own address, and then wait for and return the response:

Note how exceptions get mapped to TransportErrors using mapExceptionID, which is defined in Network.Transport.Internal as

Moreover, the original exception is used as the String part of the TransportError. This means that application developers get transport-specific feedback, which is useful for debugging, not cannot take use this transport-specific information in their code, which would couple applications to tightly with one specific transport implementation.